As of January 2014, I work at Duolingo. This post was published in July 2013 and hasn’t been significantly altered since then.

Yesterday I finished Duolingo‘s French and Spanish tracks after roughly 70 hours on the site. At the time of writing, that’s 3419 words spread across 132 units.

There already exist many, many articles (and even a study) that explain the site’s features and evaluate its effectiveness, so here I’ll focus on my own experience and what’s currently lacking in the literature: exactly what results you can expect after exhausting these two language offerings.

The Duolingo team constantly fine-tunes their algorithms, and some of the problems I discuss may have been fixed by the time you read this. 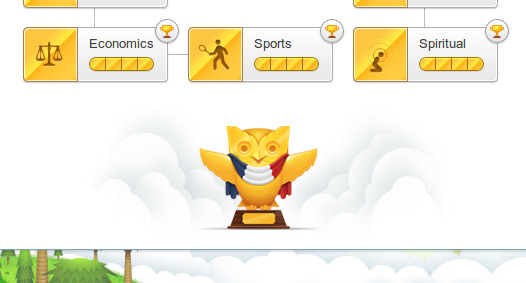 This spring semester at UVa, I took Theory of Computation with Gabriel Robins. One of his hundreds of extra credit opportunities was to check out the TED talk in which CMU professor Luis von Ahn announces Duolingo. A quick summary of this summer:

The French curriculum covers 1848 root words; Spanish covers 1571. Those numbers go up by about 50% if conjugations and irregular plural forms are included. Click here for a detailed breakdown of all words by category.

The Spanish grading algorithm is a little stricter than its French counterpart with respect to verb tenses. This means that you’ll be penalized for translating the Spanish phrase había comido as “have eaten” instead of the correct “had eaten”. Spanish and English tenses have a more or less one-to-one relationship on Duolingo. The French grader is unfortunately more lenient, treating the two main types of French past tense interchangeably. It’ll accept “I was eating” as a translation for j'ai mangé, even though “I have eaten” and “I ate” may be more precise translations. Be careful not to fall into the rut of using only one of the two past tense types exclusively!

Sometimes Duolingo asks you to read a foreign sentence into your microphone. This worked pretty well for Spanish but never did for French. Personally I find Spanish pronunciation dead simple compared to French, so the problem could just be me. As long as you can roll your R’s, humans should be able to at least understand your Spanish accent. For French I suggest practicing by singing along to French songs.

As a quick experiment, I’ve just gone to the French and Spanish versions of Reuters and tried reading the top article of each. The first unfamiliar French word I encountered was the article’s 57th; the first Spanish one was the 78th. I’m reasonably confident that I can get the gist of any news article that doesn’t dive too deep into technical terms. Context goes a long way.

Unsurprisingly it’s much harder to come up with foreign language sentences yourself. Online chats are the only place where my speed might be considered tolerable, since the time it takes to type serves as a buffer. Even then, I usually have to reword my English sentence so that it uses simpler grammar before mentally translating. Translating to Spanish is somewhat easier than translating to French because the stereotypical Spanglish rules, like sticking an “o” at the end of an English noun, often actually work.

Spanish spelling is so easy that you can almost always know how to correctly spell an unknown word by simply hearing it. The silent “h” may trip you up once in a while. While less phonetically faithful, French spelling is still very manageable. Many English words were taken verbatim from French, so you’ll find that both languages spell some words like communication the same way. French verb endings are the main exception to pronunciation sanity—mange, manges, and mangent are all pronounced “mahnge”. Duolingo does penalize for obvious spelling errors, but it’s fairly generous with typos.

By no measure can I be considered fluent or even conversational in either Spanish or French. I still think that Duolingo has been one of the best ways that I’ve found to spend 70 hours, and I intend to spend many more hours on the site. Now when I see something like haricots verts on the menu, I don’t need to guess what it is. When my Hispanic friends post Facebook statuses in Spanish, I understand what they’re saying. When people throw expressions like je ne sais quoi into their English writing, I don’t need to resort to Google.

Hopefully anyone who wants to actually learn a new language (instead of merely completing its Duolingo skill tree) will find the following resources as helpful as I have.