This page is a living document intended to save time for my future self in case the same issues ever crop up again. It’s based on my experience with running Arch on a Raspberry Pi 2, a Lenovo Flex 4, a ThinkPad P50, and a ThinkPad P51.

Arch is surprisingly stable if you remember the single most important post-install step: subscribe to the official news feed for breaking changes! 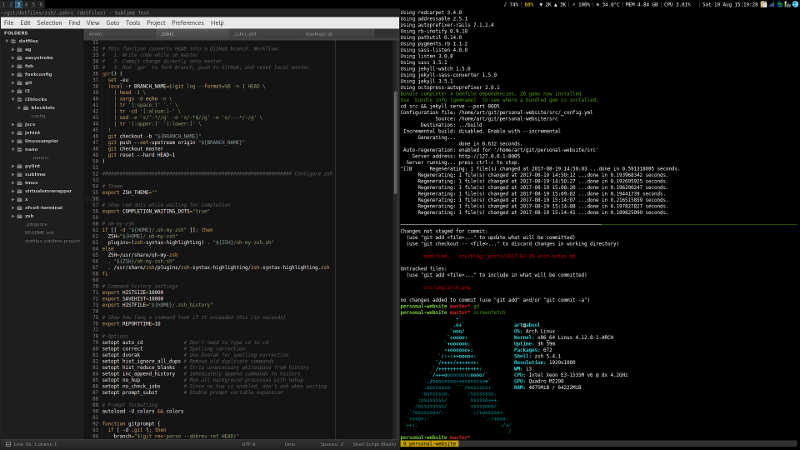 Recovering from a bad upgrade

I once ran a pacman -Syu that spat out a bunch of errors, probably due to an unfortunate interaction between package versions available at the time. After lazily crossing my fingers and restarting the computer, I got a boot error (of course):

Some weeks later I crossed my fingers and ran the upgrade command again, which fixed everything. How do you run commands on a system that you can’t even boot into? I followed this advice to use arch-chroot. Cue painfully detailed guide to arch-chroot:

External HDDs not marketed specifically for Mac are typically formatted as NTFS, the file system used by Windows. It’s best to keep NTFS if you ever plan to access your HDD from Windows, in which case you’ll need to do a little extra setup for Linux:

Make sure to provide async as a mount option instead of sync! The latter absolutely kills write performance on NTFS; we’re talking less than 100 kB/s.

When uninstalling packages, always use pacman -Rs to include would-be orphans.

Pacman doesn’t delete old package versions, so you’ll need to do so yourself after package upgrades:

Pacgraph shows your largest installed packages, which you can then remove if no longer needed.

The systemd journal can grow up to 4 GiB. If you don’t need all those logs, you can cap it to a lower value.

I had Docker for a while and later decided to uninstall it. Deleting /var/lib/docker freed up 8.1 GB.

Many applications that watch your filesystem for changes can hit the OS’s (usually rather small) default limit on the number of files that can be simultaneously watched. I’ve personally run into this issue with Android Studio, Webpack, Watchman, and Syncthing.

Consider this the missing step in the Arch setup guide: drastically bumping up the inotify watch limit.

GRUB was presenting me with its own slow-ass shell instead of an OS selection menu. The problem was that the live USB had installed some rather important files into the root filesystem’s /boot folder instead of the EFI partition.

I had mistakenly been under the impression that mounting the existing EFI partition (used by Windows) to the root filesystem’s /boot was unnecessary because both already existed and had stuff in them. Reinstalling with the partition mounted fixed things.

Ditching GRUB (only for UEFI systems)

GRUB is the kitchen sink bootloader. Systemd comes with its own UEFI bootloader that’s much simpler and works perfectly fine if all you need is an OS selection menu. As explained in the guide, just enable systemd-boot and create the two files arch.conf and loader.conf.

In xfce4-power-manager-settings I specified that my laptop should go to sleep after an hour of inactivity, but that setting never seemed to work. The fix is to just edit one line in one file, as described here.

Manually connecting to a WPA network

TLDR of the Arch guide (run as root):

The default version of iptables drops support for a command-line option that Docker uses:

Switching to iptables-nft restores the legacy --dport option. Note that whenever you update the Linux kernel, the option may become unavailable again until the next reboot.

One day my pip install suddenly became comically slow, seemingly on the order of 10 kB/s. A pip -vvv revealed that it was hanging on “Starting new HTTPS connection (1) pypi.org”, which led me to this post that correctly identified my issue: pip tried and failed to connect using multiple IPv6 addresses until it finally gave up and fell back to IPv4.

My workaround was to simply disable IPv6 in kernel params 🤷

Connecting to an L2TP/IPsec VPN

When setting up the VPN entry, go into “IPsec Settings” and check “Enable IPsec tunnel to L2TP host”. You may also need to uncheck “Perfect Forward Secrecy”.

Update 2017-07-08: Due to a Linux kernel regression, you supposedly now must also install linux-lts and then run sudo grub-mkconfig. I still haven’t gotten it working, though.

Update 2018-12-26: I’ve given up on libreswan and networkmanager. Here’s a guide for openswan.

Getting Intel Wireless 8260 card to work

Trying to activate my WiFi card with ip link set wlp4s0 up failed with a vague RTNETLINK answers: Input/output error message. Turns out that version 22 of the Linux kernel’s firmware for my particular WiFi card was problematic. You can see what firmware version you’re on by running dmesg | grep 'iwlwifi.*loaded'.

The solution was to force Linux to use the previous version of the firmware by disabling the latest version. As root:

Since I was setting up Arch at my office without the luxury of ethernet, I actually ended up having to go through this process twice: once on the live USB and again on my laptop’s instance of Arch.

Rendering a LaTeX file to PDF works fine after installing texlive-core, but what’s up with the fugly text? Zooming in reveals that the bitmap version of Computer Modern is being used. We need to specify an infinitely scalable vector font instead.

The first step of the fix is to enable Latin Modern, the widely accepted successor to Computer Modern:

Then add this to the preamble of your LaTeX document:

Generate the PDF again, and font rendering should be fixed.

Using the default nouveau graphics driver results in xrandr freezing with an external monitor plugged in. I still haven’t gotten the DisplayPort ports to work, but here’s my solution for VGA/DVI:

However, fonts might look huge in some apps after switching to nvidia…

The proprietary nvidia driver misdetects my laptop screen’s DPI for some reason. This can be fixed by adding the command below to ~/.xinitrc and then rebooting.

A possibly related issue is that X fails to identify the laptop screen as the primary screen (even when no external monitors are connected), causing i3status to hide its notification area. This can be fixed by appending --primary to the command above.

In xfce4-appearance-settings I’ve selected the Adwaita-dark GTK theme. It looks decent everywhere except in Firefox, which will render dark scrollbars and form controls on otherwise light pages.

To force Firefox to use the default (light) Adwaita theme, I’ve created an executable /usr/bin/local/firefox script with these contents:

Make sure /usr/bin/local appears before /usr/bin in your PATH.

Install fonts-tlwg from the AUR. It looks perfectly fine and just works. I first tried ttf-ms-win10 but gave up on getting all of my Windows fonts to the same versions expected by the PKGBUILD.

First of all, make sure you have the alsa-utils package installed. It provides two useful programs to keep open while debugging sound issues: speaker-test -t wav -c 2 plays a looping audio sample, and alsamixer shows the current volume and mute status of all audio channels.

Most people online suggest muting via the command amixer set Master toggle. This works but has an unfortunate quirk on some systems: running it a second time doesn’t actually unmute!

Muting Master mutes all channels, but unmuting Master unmutes only the Master channel. That’s a problem if you have other audio channels that depend on Master, e.g. Speaker and Headphone. The pulseaudio package provides pactl, an alternative to amixer that doesn’t suffer from the same bug. Run pactl set-sink-mute 0 toggle to toggle the mute status of all channels in unison.

In my i3 config, I have that command bound to my keyboard’s mute button like so:

A pacman bug causes this error when installing AUR packages with pacaur:

To fix, uncomment Color in /etc/pacman.conf.

I installed Steam via Flatpak as documented in the Arch wiki, which initially worked fine. However, I got this error the second time I tried running Steam:

Pointing them to their counterparts in my home directory solved the issue:

I was trying to set up React Native, which involves setting up Android Studio. Everything went well up until react-native run-android:

The solution is to enable the multilib repository and then install some packages:

If your JAVA_HOME environment variable is unset, you may also need to set it to the grandparent directory of the file found by locate tools.jar. For example:

If you get errors like the one below when running Android Studio 3’s emulator, this and/or this should fix it.

On all Arch installations:

My .zshrc and other dotfiles